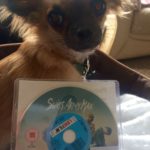 We watched Swiss Army Man this weekend, its one of those films we kept hearing about but due to limited cinema release, hadn’t seen. Now when a film is described as a cross between Robert Zemeckis drama Cast Away but with a large element of comedy cult classic Weekend at Bernie's it certainly grabbed our interest, mainly out of curiosity. Bernie's centres around 2 friends … END_OF_DOCUMENT_TOKEN_TO_BE_REPLACED