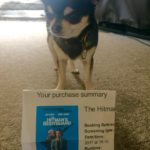 Our film choice this week was The Hitman’s Bodyguard, an action comedy which stars  Samuel L Jackson and Ryan Reynolds (who we had already seen in great films this year, Samuel in Kong: Skull Island and Ryan in Life, so hoping for more of the same). We first became aware of it when it released an excellent parody poster of the Kevin Costner/Whitney Houston smash The … END_OF_DOCUMENT_TOKEN_TO_BE_REPLACED