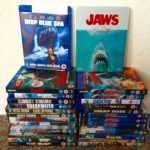 At the time of writing this, it’s the 2016 Shark Week, which normally means many channels have programmes about these fishy stars of many a film, since one first rose to fame on screen with a simple der dum, der dum theme tune. That film was of course Jaws, despite being 41 years old this year, it remains barking mad about films favourite film. Our love of this film isn’t … END_OF_DOCUMENT_TOKEN_TO_BE_REPLACED