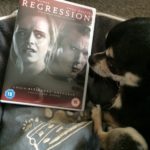 A chance spotting in a charity shop, we found Regression, the new film from Alejandro Amenabar, who made the supernatural film The Others starring Nicole Kidman. The film was at a fairly cheap price, so with the added bonus of helping a charity shop we took it home with us. Now we didn’t know much about this film, it passed us by in cinemas, but with a cast including Harry … END_OF_DOCUMENT_TOKEN_TO_BE_REPLACED