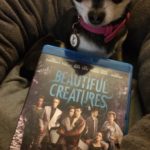 Over the festive period we picked up Beautiful Creatures on BluRay, it was one of those £1 films in Poundland, we hadn’t seen it, didn’t know much about it but knew that it starred Alden Ehrenreich as Ethan, who has been cast as Han Solo in the new Star Wars Anthology film, scheduled for a 2018 release. We had never seen him lead a film before, and looking at his IMDb … END_OF_DOCUMENT_TOKEN_TO_BE_REPLACED