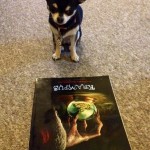 We at BMAF made it no secret that we were looking forward to seeing Krampus, the long awaited new film from Michael Dougherty, director of Trick 'r Treat.  So did it meet our expectation which were sky high when going into the cinema? The film opens on a shopping precinct having an equivalent of a Black Friday, the joy of Christmas is forgotten as shoppers push, punch and … END_OF_DOCUMENT_TOKEN_TO_BE_REPLACED

Way back in 2007, the writer of X-Men 2 and Superman Returns,  Michael Dougherty wrote and directed a horror film, which comprised of 5 stories called Trick ‘R Treat. The film introduced audiences to the masked Sam from his previous short film, Season’s Greetings. We really enjoyed this film, as did many others, to the fact that Sam is now popular, you can find him as all … END_OF_DOCUMENT_TOKEN_TO_BE_REPLACED