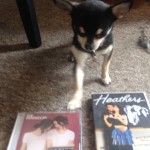 We at Barking Mad about Films love an Australian music band called The Veronicas, a band made of 2 sisters named Lisa and Jessica, they got their band's name from a 1988 black comedy called 'Heathers' a film I remember seeing and enjoying but hadn't watched in a while The Veronica's self titled latest album includes a song called Did You Miss Me (I'm a Veronica) and the I'm a … END_OF_DOCUMENT_TOKEN_TO_BE_REPLACED