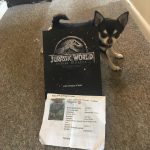 We headed off to see the sequel to Jurassic World and the now 5th film in the Jurassic Park franchise based on the novel by Michael Crichton Following the events of the last film, the dinosaurs are now at great peril as the volcano on the Island is set to erupt which would wipe them out and making them extinct for the second time. The world is now in great debate as to if … END_OF_DOCUMENT_TOKEN_TO_BE_REPLACED