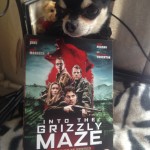 The BMAF as we have mentioned previously are very fond of a creature feature and this week we went down in the woods for a great surpirse, a film described as 'Jaws with Claws'The formerly titled 'Red Machine' but now the much more threatening 'Into the Grizzly Maze' was a cut above your usual B movie film due to its impressive cast, James Marsden from the 'X Men movies', no … END_OF_DOCUMENT_TOKEN_TO_BE_REPLACED