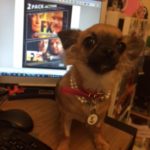 In the UK we have various ‘Freeview’ channels which air movies, some show older classics, like the Horror channel, which we have blogged about previously. Another is  Sony’s ‘Moviemix’ channel. A film we discovered was a 1986 thriller called F/X: Murder by Illusion. The film, directed by Robert Mandel, from a script by Gregory Fleeman & Robert T. Megginson, follows … END_OF_DOCUMENT_TOKEN_TO_BE_REPLACED