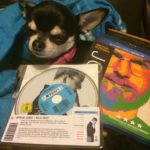 This week movie rental was one of the big Oscar contenders of last year, Steve Jobs. We however not so long ago also saw his story portrayed in the 2013 film Jobs. The 2013 film had Ashton Kutcher as Steve Jobs and covers most of his career including the creation of the first Apple computer and way up to the creation of the iPod. The latest Steve Jobs film, however, gives … END_OF_DOCUMENT_TOKEN_TO_BE_REPLACED