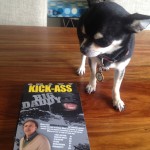 This weekend, Channel 5, one of our TV stations had a disaster movie weekend and amongst their chosen features was the network premiere of 2014 film Left Behind. A film, of what seems to be a never-ending list starring Nicolas Cage! Due to his well-known issues with the Tax Man, he seems to have a film come out every 4-6 months to pay the bills, some of which you may have seen … END_OF_DOCUMENT_TOKEN_TO_BE_REPLACED