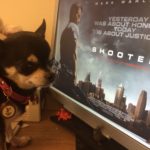 One of our favourite action films of recent years was the 2007 Shooter, directed by Antoine Fuqua. We were reminded of it when we heard that it was being remade for TV, and will debut on Netflix. It should be noted the film itself was based on Point of Impact (which is available at Amazon here) the first in Stephen Hunter’s book series, so it does have the content to extend … END_OF_DOCUMENT_TOKEN_TO_BE_REPLACED