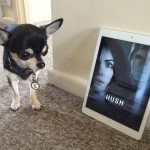 In 2014, we enjoyed a horror film with Doctor Who star Karen Gillan called Oculus.  So when we heard its writer/director Mike Flanagan had made a new film, Hush, now showing on Netflix, we had to give it a watch. Unlike Oculus, this is not a supernatural horror film, but a home invasion, scary film. Now the home invasion film has been done many times before, examples such … END_OF_DOCUMENT_TOKEN_TO_BE_REPLACED