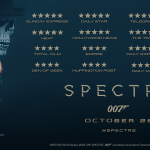 The new James Bond 007 film, Spectre has justhad its Cinema release, here in the UK. Yet it has only dawned on me that it is being released on a Monday, not the usual Friday day of new releases! When I was younger, films used to be released on a Sunday, you would always hear the booming voice at the end of the adverts on TV announce ‘At a Cinema near you from Sunday. Check … END_OF_DOCUMENT_TOKEN_TO_BE_REPLACED