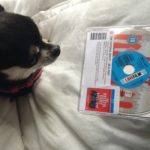 In 1991, we saw the debut film of a director called Quentin Tarantino, that film was Reservoir Dogs and it was one of the best films of that year by far.  Proving that was no flash in the pan, his next film would reap even more acclaim, and turn John Travolta back into a leading man, that film was of course Pulp Fiction.  Tarantino’s films have continued to not … END_OF_DOCUMENT_TOKEN_TO_BE_REPLACED