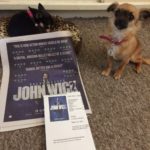 This week there was only one new release for us and that was the big action sequel John Wick 2. We think the first John Wick is one of the best action films we had ever seen, in part this was because of the huge emotional attachment we had to it. Simply because when John Wick’s dog was killed, he had so much anger that he wanted revenge and we could only imagine how much … END_OF_DOCUMENT_TOKEN_TO_BE_REPLACED