The San Diego Comic-Con  http://www.comic-con.org/ is now one of the biggest events on the movie calendar, especially for films of the science fiction and fantasy genre.

This year the London Comic-Con http://www.londonfilmandcomiccon.com/  was just as much on the map when it had a Back to the Future reunion with members of the cast holding talks and meeting fans.

It’s a great way for film companies to promote their films, and for the film fans themselves to meet their heroes and get photos and autographs, as well as buy movie memorabilia and see film props, even pick up the odd freebie such as a film poster given away as promotional items.

Possibly what they are most famous for is cosplayers, these are fans of the films that want to show their passion and love of a film by dressing up as a character from a film, from a Star Wars Stormtrooper to a Marvel Avenger!

Fans of the films not wanting to dress up could get their picture with them and celebrate their love of the film. Just be careful with the masks, at the San Diego Comic-Con it has been known for stars to dress up so they can move around the events with no one knowing who they are (here is a story of Jared Leto going for this method  http://www.radiotimes.com/news/2015-10-13/jared-leto-went-incognito-at-new-york-comic-con-and-this-joker-fan-had-no-idea )

Of course, a cosplayer doesn’t have to wait for a comic-con to dress up, indeed they can do it for parties etc. I have also seen them from the streets of New York to London streets and local carnivals.

One of the benefits of these can be like the services provided by the UK Garrison http://www.ukgarrison.co.uk who can attend events as Star Wars characters etc is that they can also raise money for charities.

Secret Cinema shows films and actively encourage their audiences to dress up to get the movie experience, which proved extremely popular for their summer event this year centred around Star Wars: The Empire Strikes Back.

Star Wars: The Force Awakens, with its midnight screenings, will surely have many a cosplayer excited about the event and dressing up. However,  it is sad to read that following the horrific shooting incidents in the USA, the decision has been made by 2 major chains to welcome the dressing up but banning the use of masks and lightsabers. http://www.usatoday.com/story/life/movies/2015/11/03/star-wars-the-force-awakens-masks-lightsabers-amc-cinemark/75089340/

So do you Cosplay? Who would you love to dress up as? Have you met a favourite character in costume? We’d love you to share your experiences with us here at Barking Mad About Films 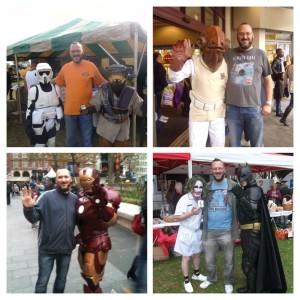