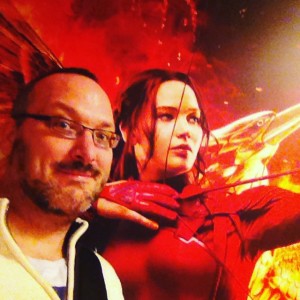 We have just left the cinema after seeing one of this year’s most anticipated blockbusters. The Hunger Games: Mockingjay Part 2

A lot was riding on this film, as there seems to be a huge disappointment from the decision to split Suzanne Collins 3rd book in 2. The first part did not offer a lot for those who loved the books and I know from speaking to those who hadn’t read them, they found Part 1 dull.

As fans of the book, there was more than enough to keep us entertained but we do accept that this was due to a great performance by Jennifer Lawrence. We are big fans of her here at the BMAF but we don’t feel we are biased in saying she is a phenomenal talent, the fact we find her pleasing on the eye is a bonus =)

The film starts pretty much where we left off from Part 1, Peeta (Josh Hutcherson) has tried choking Katniss (Jennifer Lawrence) to death having been held prisoner by President Snow (Donald Sutherland)

Katniss battles with Panem leaders President Coin (Julianne Moore) and Plutarch (the late Philip Seymour Hoffman) to take the fight to the Capital. However, they think her status as the Mockingjay means she is too important to lose.

She is sent on a mission with Boggs (Mahershala Ali) and his squad which features Cressida (Natalie Dormer) & Gale (Liam Hemsworth) with the objective of making videos, to rally the troops. She is also joined by the newly married Finnick (Sam Clafin) with Peeta.

Whilst on the mission, the team known as Squad 451 come under attack from pods, advanced weapons to protect the capital, during an attack, Peeta turns killing one of the squad. Once escaped, the survivors find that Boggs has put Katniss in charge and she tells them they are actually on a secret mission to kill Snow!

With the mission now in place, the team head into the tunnels to reach the Capitol. During these tunnels, the team come across the genetically created mutts which results in casualties to the team, only to finally face the Capitol and more casualties occur.

This film really does reflect the horrors of war. We see innocent people killed by gun and bomb. Characters that we have come to love through Katniss do die!

The rich getting rich and the poor getting poorer are issues that dwell into real life too.

The end result is truly horrifying, as we find out agendas that have put in place to serve political gains, which Katniss resorts to violence to end before returning to District 12.

The film, of course does have its issues, the main being the love triangle of Katniss, Gale and Peeta is not as strong as it could be. Whilst the actors do well, they struggle to put in performances to match Jennifer.

The other is you do feel yet again that film was not needed to be split in two. This does not mean Part 2 drags, in fact, time flies by so if you are a fan of the franchise, you will not be disappointed.

The odds are very much in your favour that you will feel satisfied by this final instalment and fans of the book should be pleased too.