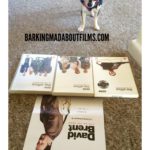 Some 13 years have passed since David Brent (Ricky Gervais) left Wernham Hogg to become a travelling salesman in the hugely successful BBC show The Office.  In the final episode of the show, it touched upon David becoming a singer, with his attempt to hit the big time included the releasing of a single which didn’t even touch the Top 40. We next saw David in 2013 when he … END_OF_DOCUMENT_TOKEN_TO_BE_REPLACED