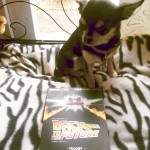 In film history, Marty McFly went to Wednesday 21st October 2015 in the 1989 film Back to the Future Part II.   The internet, after many a fake post about previous dates he went to, finally got excited for the date to become reality. No more so was this noticeable than on the internet, the build up was fantastic! Pepsi revealed they were going to make and … END_OF_DOCUMENT_TOKEN_TO_BE_REPLACED