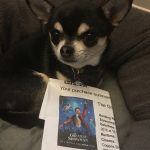 We went to see The Greatest Showman, a film that we would have said is not one that we would normally have chosen, but friends had enjoyed it and with not much else exciting us we gave it a try! The film follows P.T. Barnum (Hugh Jackman) and his huge rise to success and the highs and lows of that, in this musical from director Michael Gracey. The film opens with a … END_OF_DOCUMENT_TOKEN_TO_BE_REPLACED