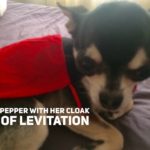 Marvel’s Doctor Strange was this week’s cinema visit. We didn’t know much about this character,but being a fan of the BBC hit TV show Sherlock, we wanted to see what Benedict Cumberbatch could do with another iconic comic bookS character. Now we went into this film, not really knowing what to expect, as it was co-written and directed by Scott Derrickson, who we know mostly … END_OF_DOCUMENT_TOKEN_TO_BE_REPLACED