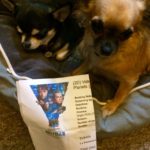 We could not wait to see Luc Besson’s Valerian and the City of a Thousand Planets which is based on the popular graphic novel series Valerian. Whilst his last film Lucy was also SyFy, this was big budget fare more like his classic The Fifth Element. The film opens with a montage of first encounters to take us to the 28th Century and Space Station Alpha (known as the City of … END_OF_DOCUMENT_TOKEN_TO_BE_REPLACED