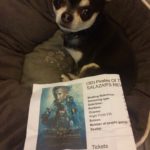 Today, we went to see the Fifth instalment in the Pirates of the Caribbean film franchise. Depending on where you live, it’ll either be called Salazar’s Revenge or Dead Men Tell No Tales. Now we have liked the previous sequels but in all honesty, never found any of them to quite bring back the magic of the first film, The Curse of the Black Pearl. Well, this 5th film is … END_OF_DOCUMENT_TOKEN_TO_BE_REPLACED