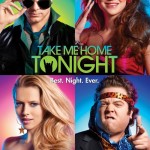 This film, directed by Michael Dowse, who made BritCom It’s all gone a bit Pete Tong and the Ice Hockey comedy Goon, appeared in the TV schedule this week. It’s a film that had passed me by, but my interest was perked by seeing Hollywood Man of the Moment, Chris Pratt was in it. Being a RomCom, I took to the sofa with the wife and gave it a go. The story centres around Matt … END_OF_DOCUMENT_TOKEN_TO_BE_REPLACED