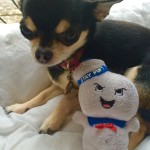 Way back in 1984, I saw a film that I loved called Ghostbusters and 5 years later, it spawned a sequel, which whilst I didn’t enjoy as much, it was great seeing those characters again. In fact so much so, I intend to give Ghostbusters II another viewing soon Now in 2016,  the inevitable reboot is gearing up for release but the bile that has been said about it without even … END_OF_DOCUMENT_TOKEN_TO_BE_REPLACED