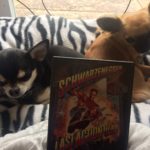 We decided to re-watch a classic Nineties film today, Last Action Hero a film that would bring back the director and star of Predator, John McTiernan & Arnold Schwarzenegger. Widely accepted as Arnold’s first major box-office failure, in part due to rushed production and the fact that it went almost head to head with the huge success that was Jurassic Park, with a script … END_OF_DOCUMENT_TOKEN_TO_BE_REPLACED