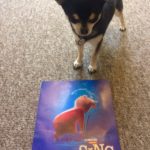 Today we saw animated box office hit Sing from writer/director Garth Jennings about some animals competing in a talent show. The film follows a Koala bear called Buster Moon (Voiced by Matthew McConaughey) who owns a failing theatre and is desperate to put on one big show to save it from closure. With the popularity of talent shows on TV, he believes that by putting one … END_OF_DOCUMENT_TOKEN_TO_BE_REPLACED