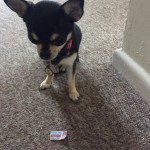 When the announcement of Ant-Man was initially made I was actually looking forward to this one as the writer/director team was to be Adam Cornish and Edgar Wright! Adam wrote the fun Attack the Block and Edgar was of course behind Shaun of the Dead. Creative differences were given and the 2 were taken off the project (although do get credit on the screenplay) brought in to … END_OF_DOCUMENT_TOKEN_TO_BE_REPLACED