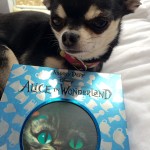 Over the last couple of months, we have seen images revealed for Disney’s new version of The Jungle Book directed by Jon (Iron Man) Favreau This is a live action version of the 1967 animated film of the same name, and this seems to be the newest Hollywood trend as this will not be the first. CGI animals will be used using motion capture VFX and it has a very impressive … END_OF_DOCUMENT_TOKEN_TO_BE_REPLACED