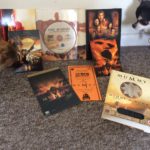 With a new telling of The Mummy starring Tom Cruise, we felt it was a good time to re-visit the 1999 version. From Stephen Sommers, who also directed another one of our favourite films, Deep Rising, this film starred Brendan Fraser, in his first real action hero role, having been known for comedies such as Encino/California Man; Blast from the Past and George of the … END_OF_DOCUMENT_TOKEN_TO_BE_REPLACED