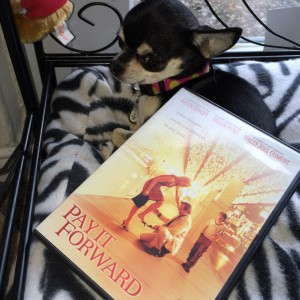 We had been recommended Pay It Forward as a film to watch awhile back, its bit of a classic having been made in 2001!

I’d kept an eye out for it appearing in the TV Schedules but eventually found it in a charity shop for .99p so swooped in!

Based on a best-selling book by Catherine Ryan Hyde, Pay It Forward is a drama that focuses on young Trevor (played by Haley Joel Osment, having just wowed audiences in The Sixth Sense)

Trevor lives life in fear of his father Ricky, (Jon Bon Jovi) returning to the abusive relationship he has with his alcoholic mother, Arlene (Helen Hunt) but finds hope his life can change from an assignment set by his new school teacher Mr Simonet (Kevin Spacey)

Trevor finds that his teacher is a bit of a loner himself, due to the fact hat he is covered in burns, following a terrible incident we learn later in the film. They become friends to the fact that Trevor refers to his teacher by his first name of Eugene.

Trevor comes up with the idea of Pay It Forward for the assignment. The premise is simple and easy enough, you help 3 people and each of those 3 people go onto help 3 more people each and so on.

Trevor though struggles with getting the chain to move, he first helps a repeat drug user called Jerry, (Jim Caviezel) living off the street, to clean up, get a good night sleep and to tidy himself up for a job interview, in return he does at least start repair work on Arlene’s car. However, we see Jerry soon go off the rails again.

Next he tries to help Eugene and his mother by bringing them together only for his father to return and control the relationship.

Of course, this is a Hollywood film and we also know from the beginning of the film when reporter Chris (Jay Mohr) is giving a car, a jaguar no less, on the proviso that he pays it forward.D

Chris travels all over to find the origins of the story, meeting Sidney (David Ramsey)  in a prison to eventually being led to Grace (Angie Dickinson) who learned about Pay It Forward from her daughter Arlene.

The film ends in a truly dramatic way in which we learn the real outcome of how successful Pay It Forward has touched people’s lives.
With estranged relationships, substance abusers, criminals etc being the receivers of Pay It Forward this film was never too sugary which it could have been with maybe the exception of the Eugene and Arlene relationship.

The acting is very good but the film coming in at just under 2 hours does outstay its welcome. It does however, deliver a message that we should all look out for each other and help out where possible

The book’s author has set up the http://www.payitforwardfoundation.org/ should you wish to get involved further, for us we will start by returning the DVD to a charity shop! 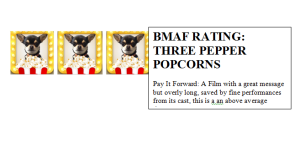