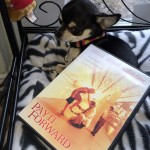 We had been recommended Pay It Forward as a film to watch awhile back, its bit of a classic having been made in 2001! I’d kept an eye out for it appearing in the TV Schedules but eventually found it in a charity shop for .99p so swooped in! Based on a best-selling book by Catherine Ryan Hyde, Pay It Forward is a drama that focuses on young Trevor (played by Haley Joel … END_OF_DOCUMENT_TOKEN_TO_BE_REPLACED