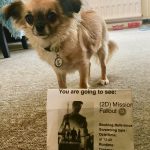 We went to see Mission Impossible: Fallout, the 6th film in this hugely successful Franchise based on the hit TV series. This film again sees Tom Cruise return in the lead role as Ethan Hunt. Whereas all the films can be watched as individual films, this one also works as a direct sequel to the 5th film Rogue Nation, again written and directed by Christopher … END_OF_DOCUMENT_TOKEN_TO_BE_REPLACED

So as fans of this action franchise, we were in the queue to see the Fifth adventure entitled Rogue Nation on its opening this week We did well to avoid  the trailer campaign for this one other than we know Tom Cruise looks to top his Dubai tower sequence from the last film Ghost Protocol  by this time hanging off a plane whilst in the air This is a franchise that never seems … END_OF_DOCUMENT_TOKEN_TO_BE_REPLACED