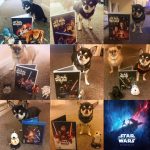 Synopsis: After 8 Official films in the saga, spin-off films & TV Shows, we arrive at Rise of Skywalker, which saw Episode 7’s J.J. Abrams return as director. In this film, the conflict between Jedi and Sith will come to an end and the truth about Rey’s past will be revealed. Once again we will meet some new and old Characters and planets as the saga comes to an end. … END_OF_DOCUMENT_TOKEN_TO_BE_REPLACED