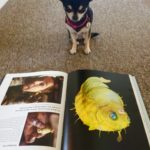 We were wowed the other day to see Google were working on a universal translator to fit in the ear! An idea very much like the Babelfish, made famous in The Hitchhikers Guide To The Galaxy (Article via  Gizmodo ) But it got us thinking of other film suggested ideas, that have become real, and incredibly there are many. Driverless cars of films such as Logan’s Run or the … END_OF_DOCUMENT_TOKEN_TO_BE_REPLACED