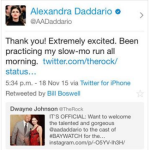 It was recently announced that Dwayne 'The Rock' Johnson would be returning to our screens in the film reboot of Baywatch, coming from Seth Gordon, director of Identity Thief and Horrible Bosses. Now at this time, I should confess to have never even seen an episode of the TV show or it’s spin-off Baywatch nights! I’m not sure why, I think initially it used to clash with … END_OF_DOCUMENT_TOKEN_TO_BE_REPLACED